What is the principle of cable machinery screw barrel

As the cylinder material of the cable machinery conical screw barrel moves forward, it is heated by the heat generated by the collision and the heat transferred by the cylinder heater. When the temperature exceeds the melting point, the appearance in the cylinder will form a molten film, and the plasticizing section will start from here. It should be pointed out that the starting point of the plasticizing section is generally not the starting point of the compression section. The boundaries of each functional segment depend on the function of the polymer, the shape of the extruder and the operating conditions. Therefore, the boundary line can be changed by changing the operating conditions. However, the geometric section of the screw is determined by the plan and will not change due to changes in operating conditions. 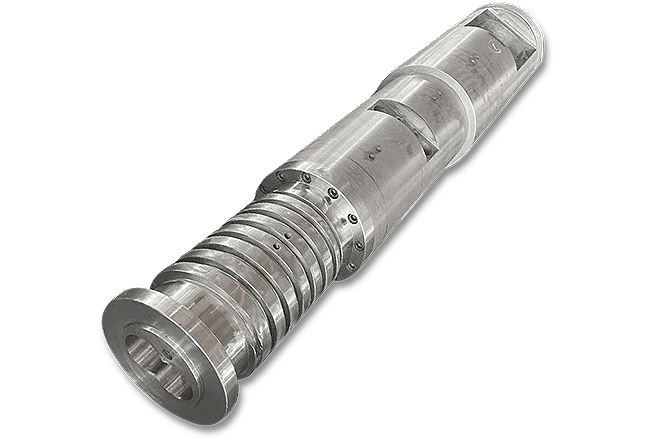 After the material has moved forward, melting will reduce the amount of solid material in all directions. After all the solid polymer disappears, it reaches the end of the plasticizing section, and the melt conveying section begins. In the solids delivery section, the melt is uniformly delivered into the mold. The cylinder of the cable machine screw barrel will have the shape of the mold flow path after the polymer flows into the mold, so when the polymer is released from the mold, its shape is somewhat consistent with the cross-sectional shape of the terminal part of the mold flow path. Since the mold creates resistance to movement, pressure is required to move the material through the mold. This pressure is generally referred to as the die pressure. The die pressure is determined by the shape of the die, especially the flow path, the temperature of the polymer melt, the flow rate through the die, and the rheological properties of the polymer melt.

Die pressure is generated by the die, not by the extruder. The extruder only creates enough pressure to push the material through the die. If the polymerization table, extrusion volume, die head, and die head temperature are all the same, there is no difference between the extruder whether it is a gear pump single-screw extruder or a twin-screw extruder, and the nozzle force is the same. The operation of the cable mechanical screw barrel is actually very simple. Material enters from the hopper. The general material flows from the hopper into the cylinder of the extruder under the action of gravity. Some materials are difficult to move when bored and require special methods to prevent material from splashing onto the hopper. After the material falls on the extruder, it is located in the annular space between the extruder screw and the cylinder, and is surrounded by the automatic thread belly of the thread and the belly thread groove of the butterfly. Jane stopped, and the cicada rod spun. Therefore, the impact force acts on the appearance of the material, cylinder and screw. At least the material is in a solid state, lower than its melting point, and these impact forces act to transport the material forward. Under the action of the cable machinery screw barrel, the granular plastic stored in the hopper continuously works along the screw groove. Under the combined action of the heat applied to the cylinder and the shearing of the screw, the plastic is continuously heated and softened, and then a molten viscous flow state is formed.